Temperature profile inside the condenser

The refrigerant pressure changes little from desuperheating to subcooling. In a similar way to evaporation, the only pressure difference between the entrance and the exit of the heat exchanger is the pressure drop. Because the flow velocity in a condenser decreases, the induced pressure drop is much lower than in an evaporator.

The temperature difference of the refrigerant between the condenser inlet and outlet is much larger than in an evaporator, due to the desuperheating. True counter-current flow in a plate heat exchanger makes it possible to utilize this temperature difference. The temperature on the secondary fluid side can be increased to approach or even exceed the condensing temperature. A temperature increase results in a smaller flow of the secondary fluid for the same heat load. This reduces the required pump capacity and the size of the liquid cooler. However, there is a "temperature pinch" that must be considered and avoided for stable operation, as discussed below.

Reducing the flow of secondary fluid exaggeratedly in an attempt to approach the temperature lines results in a heat exchange approaching zero. This greatly reduces the efficiency of the heat exchanger, and may result in only partial condensation and unpredictable performance.

The effect of pressure drop

Pressure drop is created by the friction of the fluid, and is highly dependent on the fluid velocity. In a condenser, the refrigerant flow velocity is reduced as the refrigerant condenses, because the liquid phase has a much smaller specific volume than the gas phase. Hence, the major part of the pressure drop of the condenser is induced in the desuperheating operation, when the refrigerant is still a gas. Reducing the pressure results in a decrease of the saturation temperature, i.e. the level of superheating is increased. Normally, these effects are very limited. However, they are discussed further in chapter 7.6.

Operating in co-current flow achieves the minimum temperature difference between the leaving sub-cooled refrigerant and the leaving water, as shown in Figure 7.5. Not only do the approaching temperatures reduce the heat transfer. The already low heat transfer coefficient of the one-phase subcooling operation also results in very low heat transfer efficiency. A large extra surface is therefore required for a co-current plate heat exchanger compared with a heat exchanger operating with counter-current flow.

The sub-cooling must also be kept low for co-current condensers, because the converging temperatures greatly reduce the already low heat transfer coefficient.

Incondensable, inert gases are normally not present in the system. However, they could be found in a system that has been unsatisfactorily evacuated before startup, from decomposed refrigerant or oil, etc. If inert gases are present in the system, they may accumulate in the condenser, resulting in phenomena that reduce the general performance. The incondensable gas may accumulate in a layer close to the heat transfer wall. This blocks direct contact of the refrigerant gas with the heat transfer surface. Instead, the refrigerant gas must diffuse through the inert gas layer. Furthermore, the partial pressure of the refrigerant gas decreases and the saturation temperature has to be lowered to compensate, resulting in a smaller temperature difference over the heat exchanger, as shown in Figure 7.6.

If the pressure drop is too small, all liquid will pass through the first channels, leaving the last channels without liquid. The air pocket can be emptied by means of a purge. An effective way of providing purge is by utilizing an extra connection outlet on the secondary fluid side, as can be seen in Figure 7.7. A simple mechanical float valve or equivalent ensures that only gas leaves the system. 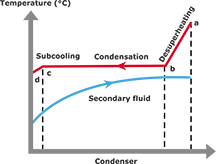 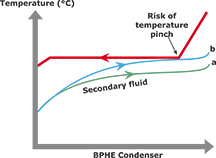 Figure 7.6 Condenser temperature profile in the case of inert gases accumulating in the condenser.

Figure 7.7 Stable air pocket in a BPHE. The air pocket can be vented by the air purge. When the air has left and the liquid enters the purge, the float rises and closes the vent.