Chemical reactions are often very sensitive to temperature changes. The ability to influence the temperature in a reactor is therefore most important for the chemical industry.

Chemical reactions are often very sensitive to temperature changes. The ability to influence the temperature in a reactor is therefore most important for the chemical industry. Depending on the kind of chemical reaction taking place, adding or rejecting heat using some sort of heating or cooling medium is necessary. Temperature control units are used to control temperature precisely. These compact units compare actual temperatures with the desired temperature and combine a heating unit and a cooling unit for water and/or oil. Temperature control units are used mostly for controlling the temperature of molds, tanks, rollers or cylinders. Often, quite complex systems are needed for tempering a reactor. The more straightforward its layout, the easier the system is to maintain.

To control process temperature accurately without extensive operator involvement, a temperature control system relies on a controller that accepts a temperature sensor such as a thermocouple as input. It compares the actual temperature with the desired control temperature, or set point, and provides an output to a control element.

The output of a temperature controller is connected to the injection mold, extruder, roller, storage tank, etc. The fluid running through the temperature control unit circuits is treated (purified) in a separate circuit (see Water as a heat transfer fluid --> Purification Processes and Water Types). Oil or raw water is used on the primary side of the BPHE.

The third controller type combines proportional control with integral and derivative control, and is known by the abbreviation PID. This controller combines proportional control with additional adjustments that help the unit to compensate automatically for changes in the system. The PID controller provides the most accurate and stable control of the three controller types, and is best used in systems with a relatively small mass and those that react quickly to changes in the amount of energy added to the process. A PID controller is recommended in systems where the load changes frequently and the controller is expected to compensate automatically for frequent changes in the set point, the amount of energy available or the mass to be controlled. Figure 11.1 shows examples of different compact temperature control units. 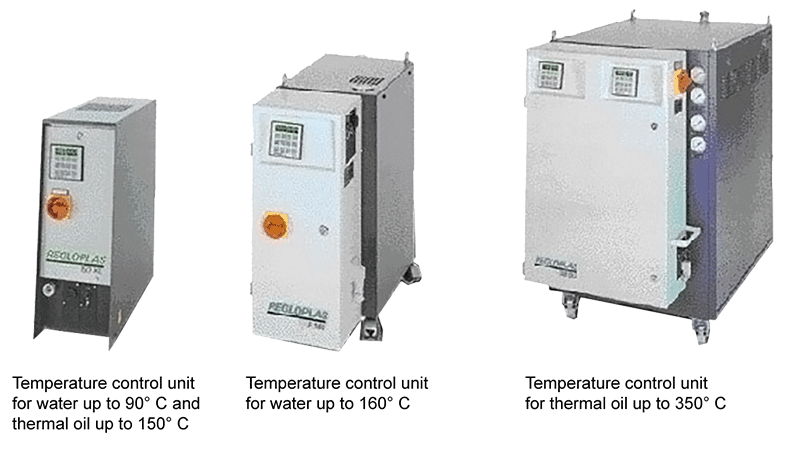 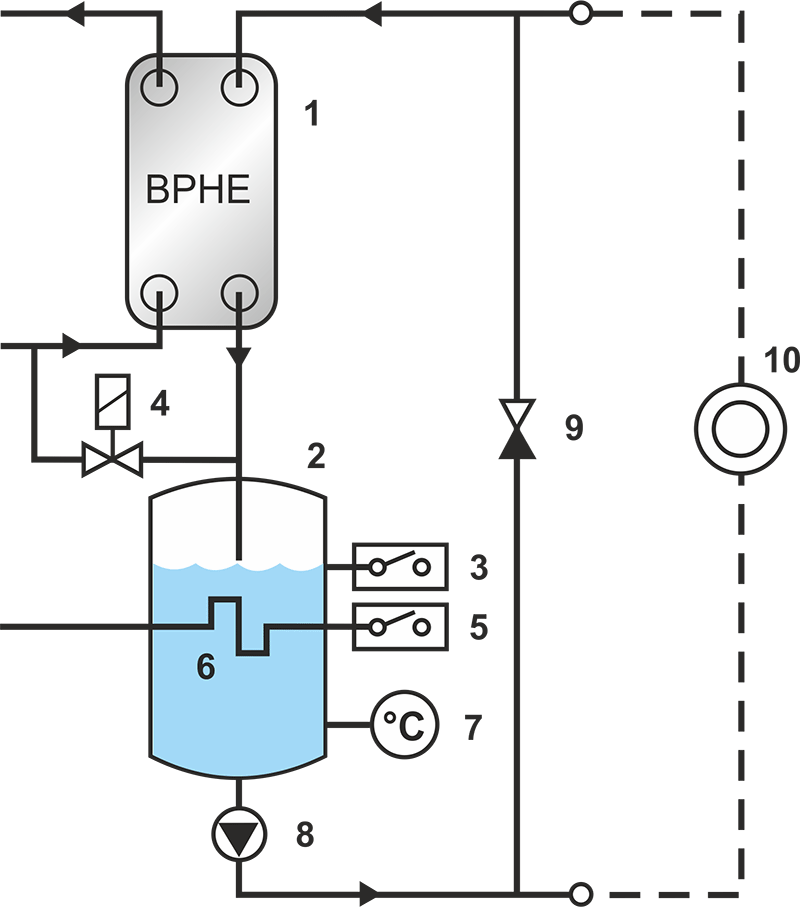 Some 90% of temperature control units are found in the plastic injection-molding industry. This is a single-phase application, but with its strong connection to thermo and circulating chillers it is normally produced by the same companies. The two main markets are pressurized water or thermal oil (up to 160 °C) and non-pressurized water (up to 90 °C). SWEP BPHEs are used for heaters and coolers. We also offer a unique BPHE solution, the T-Reg, for injection-molding applications in the plastics industry.

The purpose of the T-Reg is to provide accurate and fast temperature control to the plastic molding process:

This picture shows an example of a plastic molding process.
The T-Reg is situated within the temperature control unit (TCU) provided by our customer.

In the T-Reg, several parts of the old TCU system have been integrated into one unit.

This means the cooling heat exchanger, the electrical heater, the piping between the two and the air ventilation have all been combined into one compact unit.
The T-Reg consists of a cast frame brazed together with a 24-plate E5T BPHE.

More performance from less material
The innovative T-Reg integrates the electrical heater and the BPHE, saving piping and space and minimizing the risk of leakage between the heat exchanger and the heater.

Better performance from a smaller volume
The system must be compact. Combining the electrical heater and the heat exchanger gives a compact unit with a volume at least half that of the current system set up.

Flexibility
The T-Reg can be used with both open-loop and direct systems. The open-loop system’s risk of scaling is avoided effectively in the T-Reg because of its ability to split the water flows of the hot and the cold side internally in the heat exchanger. This allows constant full flow for the cooling media, keeping wall temperatures below the critical temperature and minimizing the scaling effect.

A reactor is cooled or heated by an ethylene glycol/water circuit, which flows from various sources into a reactor jacket. If the cooling and heating fluid entered the jacket directly, without flowing through heat exchangers first, the jacket would have to be emptied of one fluid before the next could be let in to achieve the correct temperature. The system would therefore respond very slowly. Furthermore, there is the potential for error by filling the jacket with the wrong fluid. Having intermediate heat exchangers for the different flows solves these problems. In the layout shown in Figure 11.3, four flows, containing water and ethylene glycol at different temperatures, can be mixed to supply the jacket around the reactor with liquid at the desired temperature.

The different temperatures of the four flows are obtained by exchanging heat in four different heat exchanger units. The first heat exchanger unit cools the fluid to -20 ºC using another ethylene glycol circuit from a chiller unit. The second heat exchanger cools the fluid to 10 ºC with city water. Water from a cooling tower is used in the third BPHE to produce a liquid temperature of 30 ºC. The last unit consists of four BPHEs in parallel with steam connections on the front and water/ethylene glycol connections on the back. The liquid is heated to 138 ºC using steam at 143 ºC. The temperature of the flow entering the jacket is controlled by mixing it with other flows (e.g. the cooling tower water). Gasketed heat exchangers are not recommended, because the gaskets would melt due to the high steam pressure. Figure 11.4 shows the four parallel-mounted BPHEs for the steam application. 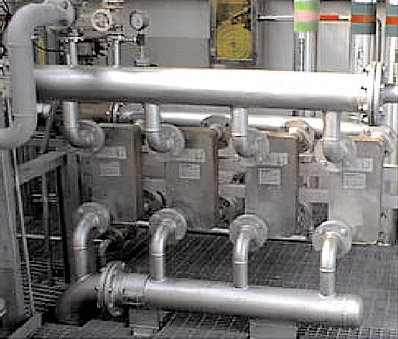